Shopping Cart
Your Cart is Empty
Quantity:
Subtotal
Taxes
Shipping
Total
There was an error with PayPalClick here to try again

Thank you for your business!You should be receiving an order confirmation from Paypal shortly.Exit Shopping Cart

So about last night. Do you know those amazing videos on Facebook of the soilders coming home surprising their loved ones? You sit at your desk like a blubbering mess with your heart just so full of joy and appreciation that you just can't stand it? I know it's not just me....we all do it!

Well I got to be a part of that for real last night! A couple of years ago my family and I met Christian when he started working at our favorite mexican restaurant. He was the son of one of our favorite waitreses; which meant we instantly loved him. He was adorable, sweet, kind, good at his job and just a great kid all the way around. He graduated high school and tried to figure out what he wanted to do...go to college, enlist in the military or move up in the restaurant. He went back and forth about enlisting and the management position. He finally chose to move up in the company. He trained to be a manager and stayed home to be with his family and friends.

But something kept tugging at him and telling him to enlist. He finally went and talked to a recruiter and after some conversations enlisted in to the Army. He left for boot camp and graduated! When he got to come home for a visit my family and I got to see him before he was deployed to South Korea.

He has been in South Korea for the past year and was supposed to come home for a visit in October. He had been working with his sister to surprise his parents. His sister is opening a nail salon and had put together a little dinner to celebrate her new business and this way their parents would be there but not expect anything. Everything was in place. His parents were there, friends (some knew what was about to happen but others didn't) but his sister who is opening the nail salon was not. Their dad was getting restless and mad that his daughter who this dinner was supposed to be for and she wasn't even showing up to her own party. You see the party started at 8:30 but it was now 9:45 and nothing. Christian was having some problems at the airport and got delayed. By 10pm they finally arrived at the restaurant. Christian in his sandy colored camo Army uniform walked in and his dad took off running and jumped into his arms, his mom just started crying and ran to him and they all three embraced each other. Everyone was crying and cheering. It was really beautiful. I was able to get a tiny video but I was blocked by a wall so it's not very good. Luckily I can see it in my mind and play it over and over again but sadly for yall I just have these pictures to show you.

So thankful that he will be home for a few weeks before he reports back for duty. So proud of this kid. Love him so much! 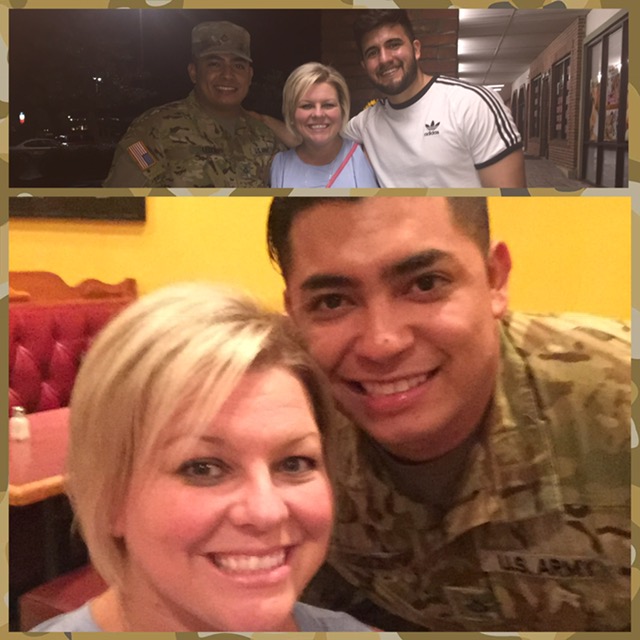